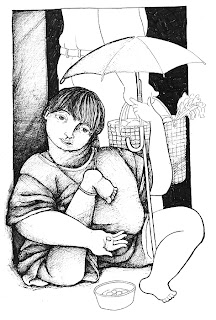 
I feel fat. I look fat. I am starting to hate it when I look in the mirror every morning after my shower and see the the forming lovehandles in my midsection. Today I made a promise to start going to the gym again after an absence of oh-so-many full moons ago.

A couple of hours later of reps, sets, lifting, puffing, curling and crunches, I feel like I am a new man with a healthy gush of new blood flowing through my veins. (Mental note: this will have to be more consistent for the next few weeks, or possibly months, until I lose the excess pounds of fat and baggage. Besides, I like the feeling that I can walk up my stairs without having to heave and facing my bathroom mirror after a shower without having to hold my breath.) And as part of my re-acquainted healthy lifestyle, I decided to pass by the local market to buy some fruits – bananas actually. It’s supposed to make you smile if you eat it regularly. Besides I need the fiber.

I was picking out the best bunch from one of the streetside stalls when it started to rain. It was a good thing I was hunched beneath the vendor’s tarpaulin that I avoided getting wet from the sudden downpour.

“Pards kapag nag-iksirsays ako sa dyim magkakaruon din ako ng mga malalaking braso na makakapigil ng dyip (When I work out at the gym like you, I will have arms that can stop an oncoming jeep),” a gruff voice sounded from behind me as I was getting my bananas from the vendor.

I looked around to see where the voice came from but I see no one, except a bald man busy bundling some sacks of potatoes into his stall away from the rain and an old woman chasing flies away from the mounds of white-fleshed chickens she’s selling in hers.

“Masuwerte ang misis mo sa iyo at mukhang kayang-kaya mong buhatin sa laki ng braso mo,” (Your missus must be lucky. With your big arms you can lift her easily) the voice said again and it seemed to come from beneath a familiar tattered, frayed-at-the-edges yellow umbrella just behind me. My suspicion was confirmed when from beneath the umbrella a hand reached out and touched my leg.

It was Yellow, a young man with a crippled right leg held with a rope tied around his neck and his umbrella. I call him “Yellow”, on account of his quite colorful accoutrement that shields him from the elements or otherwise.

For the past few weeks, he’s been a fixture along Libertad. On some days he would be sitting in front of Mcdonald’s at the corner of Taft grabbing unsuspecting women by their legs as they pass by. If the unknowing victim’s wearing a skirt, he would tug violently at the hem. And in the midst of angry shrieks and cusses, as the hapless victim would tug at her dear dignity, he would jeer, hold on to the prized skirt and peek underneath it, until some chivalrous man would warn him – physically sometimes –to lay off the woman.

“Sa palagay mo kaya eh kapag nagpalaki ako tulad mo, eh kaya ko nang bugbugin yung mga nagpapaalis sa akin? (Do you think if I grow as big as you, I can punch those who chase me away from here?), he asked me. I guess he was referring to that time I spotted him being chased away with hotdogs.

It was a lazy Sunday afternoon when I was looking for something different for merienda other than the bananacue I would usually buy from a favorite stall in Leveriza. I craved for hotdogs. I remember that a few meters down the street near Solutions (a local bar for women or those who think they are) was this new hotdog stand run by a plump and jolly childless widow who used to cut hair in one of the numerous parlors that sprouted along the street. She sells these footlong hotdogs either skewered on a stick or jabbed in between two buns that would satisfy an elephantine-hunger, such as I would have, if plastered all over with mayonnaise, catsup and pickles.

I decided to walk to the stand and as I neared it, with visions of biting into a juicy dog, I could hear a woman yelling and cussing at the top of her lungs and saw hotdogs flying in the air! Different sized meat-missiles - from footlongs, to regular dogs – were being hurled by the fat woman at an open yellow umbrella. As I drew near the stand, I could see her target. It was Yellow, crouched behind his shield and greedily munching away at a bunch of hotdogs and buns oblivious to the missiles hurled at him most of which just bounced off from his umbrella.

“Salot kang p*******a ka! Baldado ka na nga, magnanakaw ka pang t*****a ka!! (You’re a plague you s.o.b.! You’re already a cripple and still you’re a thief you s.o.b.!!),” shrieked the once jolly fat widow who has already lost half of her days inventory of dogs from being thrown at him.

“Oh ano Pards? Bibigyan mo ba ako oh hindi? Huwag mo sabihing malaki ka. Kapag lumaki ako, kakayanin din kita (So now what? Aren’t you going to give me anything? Don’t tell me you’re big? When I am big, I will take you anytime),” demanded Yellow as he kept on holding my leg. I took a couple of pesos from my pocket and flicked them into an open can in front of him.

“Yun lang?? Sa susunod ha, lakihan mo. Magbibigay ka rin lang kokonti pa. (That’s it?? Next time make it bigger),” he grumbled as he took the two coins from the can.

Though the rain hasn’t stopped, I decided to take my bananas and walk the few meters to my place. A few steps away, I turned my head and saw Yellow grabbing a banana from the stall I bought mine from.

I think I’d still be seeing more of him.
Posted by palma tayona at Wednesday, July 18, 2007

Where and to whom does he go home to, I wonder?

@ rhodora : he's a unique character. hard to miss him when one passes along libertad. where he goes home to? i have no idea. :-(