THE DAY I TOUCHED A COCK 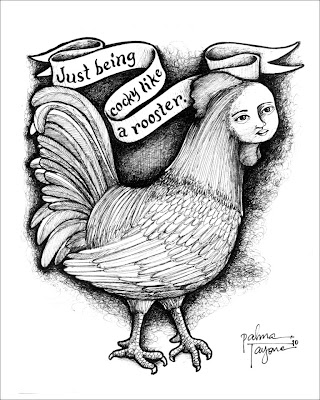 "Just being cocky like a rooster."
pen and ink
drawn on Kokuryo Japanese Sketch Pad
7.5" x 9.5"
August 18, 2010
"Bro, you get one cock for only 2,000 pesos. Wanna take care of one?" asked Johnson as he turned excitedly into a stall in Cartimar selling fighting cocks of every size.

"And why would I take care of one?" I asked, slightly annoyed at having to talk about fighting cocks again. "The only way I could look at a rooster, or any kind of chicken, is when they're served in a platter."

"Bro, look at the talons of this one here. Give him just a few weeks and he's all ready for the pit," he muttered excitedly as he approached the cage of one very proud but still young cock and ignoring every word I said.

"A proper owner of these fighting cocks would give them feeds that would increase their power and stamina, sometimes steroids," he continued while he had the cage opened and he began to stroke the feathers of the creature."Come on, feel it," he prompted me to come closer. "Brush your fingers against his silky feathers. Feel how strong his legs are." He took my hand and had me 'feel' the creature.

I could feel the sinews of the muscles beneath the layers of silky feathers, how warm it felt to the touch and the strength that seems to want to escape from that plumed body. I have to admit, it felt nice to feel such power in a bird such as that young cock.

And then suddenly, the creature began to twitch, pull its head back, flap its wings and bellowed a loud crow. To my surprise, I instinctively threw my hand and pushed the flapping, crowing bird out of Johnson's hands and it 'flew' in a flurry of feathers out into the busy alley of pet stores. A bit of scampering, some shouts and scuffle ensued with some of the men, Johnson included, trying to chase the running bird. After a few minutes, a small boy at the end of the alley caught the bird and was returned to the store owner who immediately returned the creature to its cage. Unperturbed with all that happened, the cock, flapped its wings again and gave another loud crow inside his cage.

"Whew, good thing the bird was caught," Johnson sighed thankfully under his breath. "I won't let you touch a cock next time we're here," he added.

"The next time I touch a chicken, I'll make sure it's dead," I quipped.
Posted by palma tayona at Thursday, September 02, 2010 2 comments: