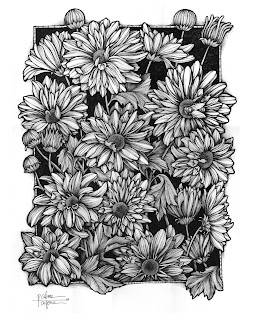 
“I never realized how beautiful a fly could be like until you get to look at it up close,” so goes my text message to Sheila.


I was putting the finishing touches on the last flower I was doing when Andre sent me a message that he’s already downstairs. “Ahhh, great! He’s bringing in food. Finally!” and so raced my thoughts that I can finally eat dinner after waiting for almost an hour.

He had with him a bag of longganisa from Excelente, some fresh tinapa, a few firm and ripe tomatoes, a Goldilocks mocha cakeroll and a wide grin when I opened my gate.

“UGH! You’re way too early with your greeting. It isn’t until a week from now. And what took you so long? I’m hungry,” I complained as I got hold of the bag of goodies.

“Hay naku, you’re just getting grumpy because you’re getting old. Be happy,” he chirped.

We went upstairs and I immediately proceeded to cook the longganisa and the tinapa on pans that have already been greased with oil.

“So, is this what you have been doing? These flowers?” I heard Andre’s voice piping in from the other end of my flat.

“Yeah, that thing took me a week and a half to finish. Okay ba?”

“Pwede na. Ay, and why is there a langaw on the flower here? Is this what you have texted me about?”

“I thought it’s one of those text messages that you send when you’re bored.”

While I was removing the tinapa from the pan, Andre said, “Do you know that flies don’t alight on flowers?”

“Yes. They’re not attracted to the smell of the flowers. They usually land on sweet, rotting flesh, refuse etc. That’s what they feed on you know.”

“Well, it all started when this lone langaw flew and alighted on my nose when I was lying on the sofa the other day. So I thought, I’d draw the little bugger,” I said while I was slicing the fresh tomatoes.

“Hay naku Daniel. It only meant one thing,” he said as he was getting the spoons for dinner.

Happy birthday on the 30th, Daniel!

My daughter's birthday naman is on the 31st. My three children are all July born - 7th, 14th and 31st! hehehe.

thank you. and happy birthday to your kids too - two cancers and a leo (am a right?)

Oh wow. I like the paintings. Can u give me one? (If I have to pay, just make it cheap pls. HeHe.)

and thank you for the greetings.