A LETTER TO AN ANGEL 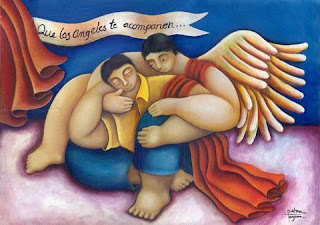 The following is the content of an email to Juan Karlos Lopez - a poet/teacher residing in Beijing, China.

I am annoyed with hotmail... I already typed an email and all of a sudden, I get a prompt that their system is down. And when I tried to retrieve what I wrote... it was gone... kapuff! Poof! Caramba! So, I am using this yahoo account instead. Anyway, I simply wanted to tell you that I finally woke up today feeling like a bull in a toreador's ring - ready to grunt, snarl and bury my horns in a hapless victim's flesh after my nasty bout wth the sniffles for several days (I really thought it would never end.) But of course, it's all just in my mind. I called up my brother this morning to borrow his digital camera. But alas! It turns out that his wife has it in her office. Hmmm.... what to do? *TING!* Inspiration struck me and I realized, I have a scanner. So immediately, I got to work. I used the frankenstein-method. I scanned the painting part-by-part and later on stitched the images in photoshop.

VOILA! The image of "Que Los Angeles" is now in digital form. (But sadly, I cannot scan the frame. It's beautiful. My brother did a nice job of using a silver-gilded wooden frame with those nice relief effects. It actually looks like the painting was an old one - and expensive.)


I want to tell you something. When you gave me the title of QUE LOS ANGELES TE ACOMPANEN, I realized it was also a painting done for someone in my past. More than a dozen years ago in university, I was at the lowest point in my life. Lost, bewildered and struggling to make sense of a hurtful past that was slowly bringing me down to the point of considering something terminal. And then I met a kind soul - Andrew Guitarte.

In my eyes, he is a saint. A very honest and truthful man. Through him, he gave me the chance to consider everything. I never knew if he realized it, but he gave me the things I really needed - a heart to understand, an ear to listen and a shoulder to cry on. He was a stranger who gave of himself to another stranger. And the strangers became friends.

It is for this man that QUE LOS ANGELES... became real for me. And that's for all the angels in our lives.

You know what Juan? Until now, I am still looking for him to say, "Thank you for being my angel."
Posted by palma tayona at Friday, July 27, 2007