I AM AS BLUE AS BLUE CAN BE

It is finally done. Two weeks and a near disaster, this 72 x 24 inch piece is done. Just a few minutes ago it was picked up from my apartment and I will say 'hello' to it again on July 29 during the biggest gathering of galleries in the metro and the second international art fair in the country called Manilart 2010.

It's a pretty exciting affair really. And I hope, I still have Marga's camera and I can go clickity-click-click during the gala night. (I am thanking her in advance in this post.)

And yes, as the title above suggests, that's how I named this piece... finally.
Posted by palma tayona at Saturday, July 24, 2010 4 comments:

It's a Wednesday morning and I spent a sleepless Tuesday evening thinking of a foot. Yes, a foot... a hand and a bird.

I never thought that I would be dwelling on how a foot would look like or how significant it is that it can affect the composition of an image and its meaning. I drew the top image's foot as resting on the edge of the green man's skull without even bothering what it meant. That sketch was done in a moment of 'emotional high'. Not thinking too much on how the image was and would be, I just drew it. Not having any afterthoughts even.

I laugh now at myself when I have to admit that I 'repeated' myself. Yeah, that drawing was a development of something else, which came out of this ... 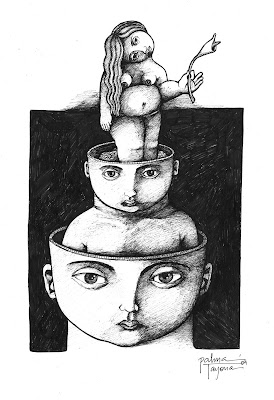 (I left it as 'untitled'. Frankly, I forget what I felt at the time I drew that.)

But what about the damned foot?, I asked myself. It all began with the bird... really. Eh?

Yeah the bird. I liked how the bird has this 'looking upwards' with the blue shiny eye, though marble-like and wide-eyed, like it not only looks upwards but away. It's wings are spread, wanting to let go of the green man's grasp, wanting to fly but held firmly down. Now that I am looking at it, I realized I painted the green man's hand closer to his lips. Not only is it holding the bird tight but his hand is gesturing towards his closed lip as if I wanted him to say 'Be still. Be silent."

As I go closer towards finishing this painting, I spent a good four hours last night painting and re-painting that damned foot. I abandoned my original intention of having the foot rest on the green man's head. I actually painted it over last night and opted to have the top image's feet firmly placed within the green man's skull. I sort of thought, it would make the top man's imprisonment complete. But being inside and not having the chance of having one's foot out is much too 'defeating' for me. After hours of thinking about this and a couple of cups of coffee later, I went back to what i intended before. I drew it back to its original state, placing that foot firmly on the green man's skull edge and I now feel... there's a chance for this top guy to redeem himself after all.

But I think I still have to put on toenails on his foot.

This has been the fourth day that I have been sitting on the floor painting this image and it has proven to be quite soothing to the soul and heart. Yes, my emotions have stilled and I've been working on this piece with a quiet and steady beat - not bad considering that sometimes it takes me forever to finish a painting.

Am I happy? No. The pain and hurt is still there. But I am definitely finding a semblance of peace.

I can't wait to finish this. And when I do, I wonder, will I be smiling or will I'd be wretched still with remorse? 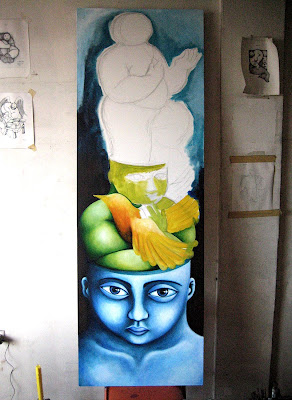 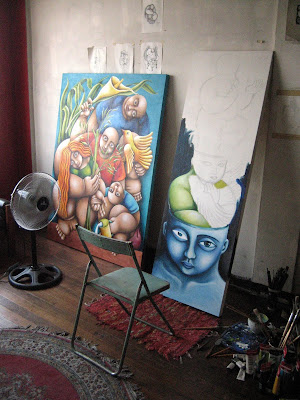 ... a painting starts to grow.

It's kind of corny or perhaps can be mistaken for being too predictable of creative individuals, but when emotions are starting to build up and there's a need to pour it out a bit, they (including this writer) tend to to do something tangible about it. Musicians write songs. Dancers let their bodies flow. Writers, poets pen down stories and sonnets. And painters... well, what else would one expect of us?

That email caused this painter to lock himself up, throw away the keys, sit on the floor, caress his brushes and let the colors dance. Three days now and I am still dancing with my colors to a slow, sad song.

I got this one morning in my email...

im sory for late reply and censya na rin dahil nagloloko ang facebook account ko...;< dan, i dont want to be rude or harsh on you but then it doesnt leave me any choice but to tell you this over an email... i know ilang ulit na rin akong nagpaalam but i think this will be the last time. im no good for-- we both know that, maniwala kaman o hindi im not the one who cud be wid u and make u happy... u deserve someone better... someone who cud rily be there for u... someone who cud rily love u... dan ill mis u and God knows kahit malayo ako minahal kita...

Whenever I find myself being unable to say what I feel in words, I turn to drawing. Here is my reply.