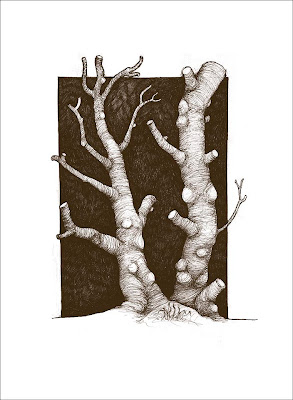 (Below is the first part of a three-part story. Thought I'd cut it for easier reading.)

Having been a member of the Catholic Women’s League for as far as my young mind can remember, Tita Caring was synonymous to that pack of women who’d be wearing white, closed neck dresses with light blue sashes and always occupying the first few rows on the right side of the church. They’re there during the evening Angelus, the daily morning and evening mass and all of the Sunday masses of the year, rain or shine. I’ve always thought and rightly so, that these women have their lives revolving around the church. It’s as if they’re God’s aging mistresses waiting for the time when He’d step down from his thrown and take them with Him by the right hand.

My aunt, Tita Caring, she was their treasurer.

“Linda, I am going to take your son to the charismatic general assembly on Saturday,” I heard her imperiously telling my mother one day as the latter was hanging the laundry at the front of the house we share with Tita Caring and her brood of adopted children. “I’ll be taking him and Tommy. I think your son should have some God in his life. It’s good for young boys like him.” And she added, “Oh, and have him wear a white shirt. I want your son to look like an angel.”

When Saturday came, she fetched me from the house. She had behind her Tommy (us kids just plainly call him Tomas) her oldest male ward. Tommy, at fifteen years of age, with his limp caused by an early childhood polio and comical way of wiping the eternally dripping snot from his face, was wearing black pants that were way too short for his uneven legs. The pants were of the kind that shimmers and has that sound like paper rubbing on each other whenever a pant leg hits the other with every step. He had on a crisp white t-shirt with a little bowtie design on the neckline and black charrol shoes, the kind I see the security guards wear at the savings bank along the main street. While Tita Caring, well... she was wearing her white dress with the Virgin Mary blue sash. Clipped under her arm was a big bag made of woven mat. It was big enough, I thought, for my younger brother to climb into who was already turning six then.

“I’ll bring him home by 9. My sister Fransing’s driver will be bringing us back,” she assured my mother as she took hold of my hand and led me towards Francing’s light blue Toyopet with an old driver that looks to be more at home in a hospital bed than behind a wheel.

I don’t remember anymore how long the drive was to the “assembly”, nor what I did or happened in the car along the way. All I could remember was when we were already there. The “general assembly” turned out to be bigger, much bigger than my young mind could ever imagine. It wasn’t just big, but rather huge. It was at the Big Dome of the Araneta.

They were all there. All the ladies in white with blue sashes multiplied to, perhaps maybe a million – dancing, chattering, singing, fiddling with their rosaries, fanning themselves with their abanicos or checking if their red-sashed stampitas of the Virgin with a bleeding heart were placed at the right spot in the middle of their chest. It was the only time when I actually saw Tita Caring acting as if she was excited as a school girl. She held my hand tightly and craned her neck above the other women in front of her, while Tomas followed us limping with his bowtied neck and biting his thumbnail. After a few moments of maneuvering through the crowd, she finally found her own group from the church which consisted of three short and pudgy white-haired women. They hustled us about, egging us to our seats before the whole place got filled up.

It was a huge dome. The ceiling seemed as high as the heavens and the big lights hanging from it are huge stars. The stage in front us (we were only a few rows away from it) was excitedly lit up with a lot of gold, silver, flowers and a big sign with glittering lights spelling out that GOD IS LOVE, LET THE HEAVENS REJOICE. All around us were old women and a few children seated and waiting for the show to begin. Odd, I thought, that the other children were also garbed like me and Tomas – in black pants and white shirts.

Then the show began. A choir started singing the same songs being sung in church – the only difference with our church choir which was composed of the older students from my school was that this one was made up of the same old women in blue and white. After a couple more songs, they started singing Allelujah and at the loudest part of it, a white-haired man wearing a strange white suit came out holding a big headed microphone. He also had on a vest that seemed oddly similar to the cloth my mother uses to cover the dinner table on special occasions. I giggled. It was the same cloth that when our mother wasn’t looking, my brothers and I would wipe our snot on it and see who had on the biggest booger.

The white-haired man with the dinner table vest started talking to the crowd on his microphone. He did his act with so much fervor – raising his hand that held a leather-bound book and all the while walking the length of the stage in the same manner as those singers would do on TV that my older brother watches.

I think we were too near the stage. I could hardly make out the words he was saying that after a few minutes of watching him I lost interest. Either that or my mind was more fascinated in watching the old women around us. Every now and then they would either clap or say “amen” in unison to the man’s words. Some of the younger ones would even jump up and down with their arms raised like it was the countdown towards New Year. I looked up at Tita Caring beside me and I noticed that she had the same look as the other women – they were all in a swoon. She had her eyes tightly closed and her hands were clasped on her chest and her lips were moving like the way she does in church when she’d be walking on her knees along the middle aisle from the big doors to the altar.

And then, I noticed something really strange happening.

I started seeing a fat woman in front of us shaking. I held on to the seat in front of me to look closer. She had her eyes tightly closed, her fists clenched, her arms raised and her bulging frame was shaking violently while she rocked back and forth in place. Then I started to hear the strangest sound I’ve ever heard in my whole nine years.

All around me, the women started gaggling and talking in weird languages producing a cacophony of strange sounds. I couldn’t understand a single word any of them was saying. Even the violently shaking fat woman in front of us was saying words that were scary. And over the din of those strange sounds I kept on hearing the man on the stage shouting “AMEN, AMEN” punctuating what he himself was speaking in a strange tongue. I was getting scared that I just closed my eyes to what was happening around me when I felt Tita Caring jabbing me on the shoulder. I looked up at her with fear in my eyes and she had this crazed look. She raised my arm and yelled at me, “Speak in tongues! Speak in tongues! Praise the Lord!” and she went back to gaggling those strange words. I stood there very scared to what was happening all around me. She was holding my arm and tightly she had had it raised. I couldn’t do anything so that I just closed my eyes again very tightly and I felt tears running down my cheeks. I let my thoughts run back to home and dinner and to my mother hanging the laundry that afternoon – away from these wild, crazed old women, away from my scary aunt, away from the sounds of these strange tongues.

Much as the same way that I don’t remember how the ride going to that charismatic general assembly was, I also don’t recall how it ended. All I know is that I spent the rest of my childhood after that incident, making every sort of excuse I could think of – from school projects, to homework and once feigning an epileptic seizure – to avoid going to another of my aunt’s spiritual renewals. She’s forever defined in my psyche the words creepy and charismatic assemblies as being synonymous to each other.