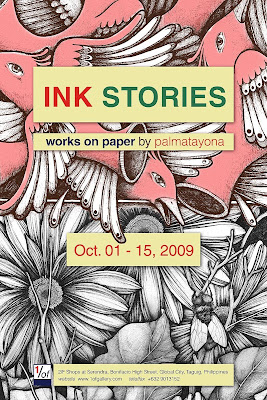 I would like to invite you... yes YOU... to view some of my latest works on paper.

A collection of more than a dozen pen-and-ink works and limited edition prints on archival paper will be on view from October 1 to 15, 2009 at 1/OF GALLERY at the 2nd floor of Shops at Serendra at the Bonifacio High Street Mall in Bonifacio Global City in Taguig City.


This is my fourth solo exhibition so far and putting up for view for the first time some of my newer works.

Hope you can drop by for a visit. 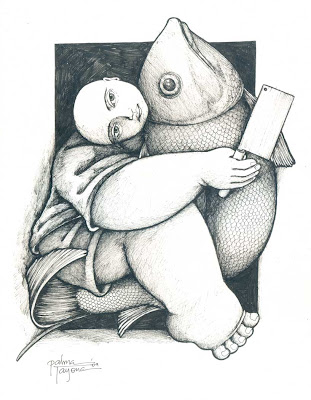 “Why are you walking funny?” Karen asked me when I walked into the dental clinic that morning. “Is something wrong?”

“Oh, it’s nothing,” I said as I slowly maneuvered myself on to the clinic’s dark brown faux-leather covered 30-year old box sofa, careful not to press together on the seat both my ass cheeks.

“Nothing?? Then why are you sitting in such a funny way?” she asked in a shrill tone that would definitely mean her schedule would be full for the day with patients waiting for a tooth to be pulled or have root canals. Things that dentists get excited with that makes me, an ordinary mortal, would find hard to fathom. “And are you wearing what I think you are wearing??”

“Yup,” I answered in a defeated manner for I cannot hide the obvious. “Adult diapers,” I added.

“Suki… bili ka na (you buy here),” Manang ushered me with a wave of her hand to the fresh fish she has on her stall. I could see piles of groupers (lapu-lapu), milk fish(bangus), cichlids (tilapia), skipjack tuna (tambakol) and red snapper (maya-maya). I began to pick on a grouper when I spotted another pile with a hastily written cardboard beside it. “Gindara” was written in black ink.

I could already imagine in my mind the scrumptious feast of fried gindara sprinkled with some soy sauce and sour lemon with a little dash of hot chili I will have for lunch.

“I woke up last night feeling “soggy”. I lifted my bed sheet and a big oily stain was beneath me. I thought I was bleeding. When I touched it… it stank of a fishy smell! Ugh!” I told Karen.

“They call it xenical fish. Makes people pooh oil after eating it,” she said.

“How was I supposed to know that? I cooked half a kilo of it for lunch yesterday and some more of it for dinner. Now I am leaking like busted oil pipe!” I moaned.

“Thanks for laughing. Now I feel like a 200-pound baby in these diapers,” I sighed.
Posted by palma tayona at Wednesday, September 23, 2009 7 comments: 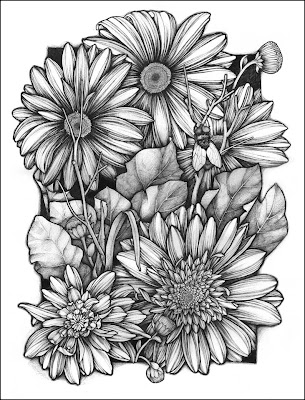 23”x 30”
pen and ink on cotton paper
I made a second version of the fly on a bouquet of flowers based on the words I wrote below two years ago.

I was putting the finishing touches on the last flower I was doing when Andre sent me a message that he’s already downstairs. “Ahhh, great! He’s bringing in food. Finally!” and so raced my thoughts that I can finally eat dinner after waiting for almost an hour.

He had with him a bag of longganisa from Excelente, some fresh tinapa, a few firm and ripe tomatoes, a Goldilocks mocha cakeroll and a wide grin when I opened my gate.

“UGH! You’re way too early with your greeting. It isn’t until a week from now. And what took you so long? I’m hungry,” I complained as I got hold of the bag of goodies.

“Hay naku, you’re just getting grumpy because you’re getting old. Be happy,” he chirped.

We went upstairs and I immediately proceeded to cook the longganisa and the tinapa on pans that have already been greased with oil.

“So, is this what you have been doing? These flowers?” I heard Andre’s voice piping in from the other end of my flat.

“Yeah, that thing took me a week and a half to finish. Okay ba?”

“Pwede na. Ay, and why is there a langaw on the flower here? Is this what you have texted me about?”

“I thought it’s one of those text messages that you send when you’re bored.”

While I was removing the tinapa from the pan, Andre said, “Do you know that flies don’t alight on flowers?”

“Yes. They’re not attracted to the smell of the flowers. They usually land on sweet, rotting flesh, refuse etc. That’s what they feed on you know.”

“Well, it all started when this lone langaw flew and alighted on my nose when I was lying on the sofa the other day. So I thought, I’d draw the little bugger,” I said while I was slicing the fresh tomatoes.

“Hay naku Daniel. It only meant one thing,” he said as he was getting the spoons for dinner.

“You need to take bath. Hahahaha…”
Posted by palma tayona at Tuesday, September 22, 2009 No comments: