WHEN RENT IS LATE...

... my landlady knocks on my door and she can be as nasty as Pearl.

The Landlord from Will Ferrell

(Just kidding. My landlady's the sweetest woman there is, and she's my squaredancing partner too.)
Posted by palma tayona at Thursday, April 23, 2009 No comments:

I posted some of my works on RED BUBBLE a couple of days ago, and look what I got... 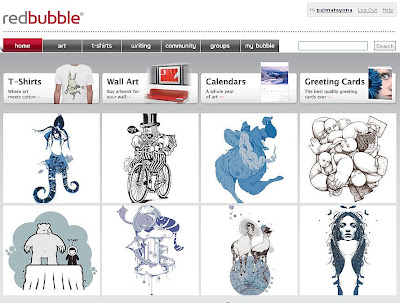 ... already one of my works got featured on their homepage. Now the challenge is, would people buy the works of a far-flung Pinoy in an Aussie site? Wait and see...
Posted by palma tayona at Saturday, April 18, 2009 2 comments:

WANNA HAVE AN ADVENTURE AND A JOB? 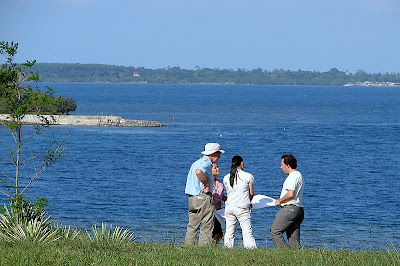 We're looking for someone who can help document the building of the Philippines' Pacific Rim Friendship Park.

Briefly, we like to describe the activity as Survivor-Meets-Habitat-for-Humanity. The idea is to bring together architecture and art students from different parts of the world who, together with counterpart Filipino students, will design and build a Friendship Park under the artistic supervision of leading artists, architects and urban planners - all in 30 days.
Puerto Princesa City is providing the land. You can view the spectacular site they are allocating here.

Students from the US, Russia, Mexico, Japan, China and Korea will start arriving on May 2 and 3. We'll give them a tour of Manila on May 4. Then on May 5, they all fly off to Palawan to build the park. If all goes well, we will launch the park on May 30. At that time too, we will also have an outdoor banner exhibit at the new park.

So... we're looking for someone who can go with the group for the entire period from may 2-31 to take photos (or better, photos and videos), document, and blog at least once every day from May 2-31, 2009. He/she will also of course be expected to help with the building of the design - but his/her main responsibility is the documentation, photography/videography and blogging. He/she can interview the participants, talk about anything interesting during the whole process (new friendships, tensions, etc), and maybe even highlight Palawan and the Philippines as a must-see destination. Lots of room for creativity, meeting new people, and learning about new cultures.

Ah, and the perks: we will cover his/her plane fare from Manila to Puerto Princesa and back, hotel stay (here in Manila and in Palawan), board and lodging for the entire month, and a MINIMAL stipend (at least P10k, maybe a bit more if we can secure additional funds). We can practically guarantee that he/she will make new and lasting friendships (maybe more - who knows?), and definitely, he/she will have a unique entry in his/her CV once this is over.

We may be able to lend a laptop and we can figure out internet access requirements later. Otherwise, he/she should have their own equipment (camera, lens, tripod at a minimum). Preferably he/she would also have a portfolio that we can view online, and blog-writing experience (and following) would be a definite plus.

If you know anyone who might be interested in this adventure of a lifetime, please have them email ASAP at info@canvas.ph

THERE IS A PERFECT WORLD...

... where incredible talent just boils through the surface REGARDLESS of age.

WATCH and be wowed.

IN A PERFECT WORLD...

In a perfect world, artists create original works of art. They sign their names on their works, claim it their own and sell them as originals... rightfully. If they make multiple copies of their works, these are numbered and their signatures are affixed onto them. If an artist will copy another's work, acquire inspiration from it or use the components of the other's works on his own, the artist will acknowledge use of the other's material. There is respect for the one who came before. There is recognition for the one who began something. BUT THAT is in a perfect world.

Coming out of the framer's shop this morning, I stepped out unto the street to notice a couple - a man and a woman - looking at a canvas with a familiar image of a pretty well-known artist's work, the value of which isn't something one throws around carelessly. The small painting was propped up on a tree and they were admiring it. I stopped dead on my tracks when I realized the oddity of propping an expensive piece of art by a dusty roadside. I also noticed the presence of a third person who was talking animatedly about how long he had to let the paint dry. He also spoke of the intricacies of applying his colors on the canvas and how he had to compose his image.

I looked at the third person knowing that he's the creator of the piece, when I realized it wasn't the artist whose work it was that I expected. You see the image propped up on the tree belongs to a more famous, living artist. And the one talking to the couple was someone who copied the painting. And it turned out, when the man pulled out another canvas, that there were two works... of the same image, of the same artist!

The artist saw me looking at the canvasses and abruptly covered one canvas with the other. I took a step forward but hesitated and turned back to join my companion Clarice back to her car.

"Did you see that?" I turned to Clarice as she started to turn on the engine.

"YES! I knew what was running through your head. I thought you were going to to talk to them," she said as she turned the wheel to drive down the street.

I looked at the rear view mirror and saw the couple handing the artist an envelope.

"I feel so disheartened..." I told Clarice. 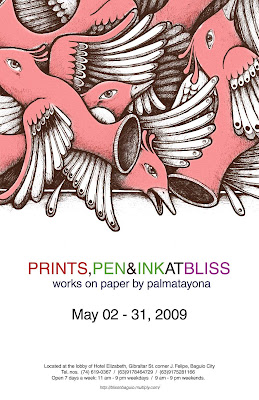 See you up there in BAGUIO CITY this May!!

A NIGHT AT KRISTO

I took some pictures from the KRISTO 2009 exhibit using Marga's camera and I figured I'd post some of them here. It all happened last April 2 at Botong's Up - a 3-floor bar that's surrounded by paintings. The top floor serves as an exhibit space and a bar. Pretty cool joint. First time I've been there. 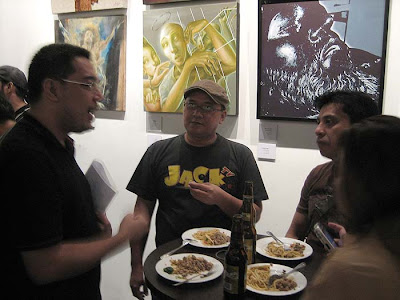 That's Delan Robillos, the guy who runs ARTery Manila talking with Buds Convocar and... (okay, I will be nailed to the cross during Lent) his name escapes me... :-( sorry! I know he's the guy who does these colorful abstracts and cool t-shirts. 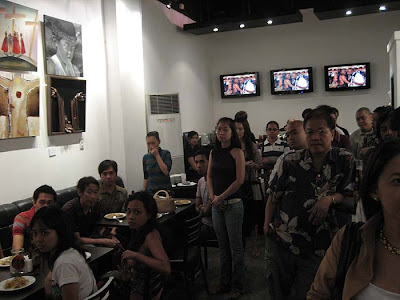 At the back is the bar where I stayed up most of the night taking advantage of the free booze. It's a Thursday before the Holy Week and I wanted to guzzle up on as much alcohol as I can before I'd take a leave from it.

The Kristo 2009 exhibit began eight years ago and was started by... 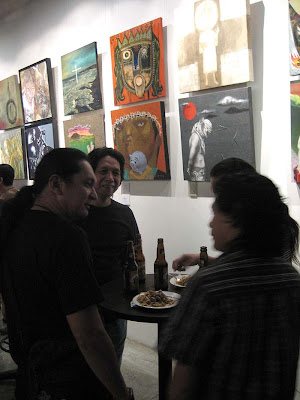 ... Salvador Ching (that's him on the left with the black t-shirt and ponytail) as a sort of yearly devotion for the Holy Week. He started with a group of artist friends in a small gallery in the north of Manila - Bulacan. Two years after it got started, it was moved here in Manila and every year there's always a new addition to the artists joining this group show. 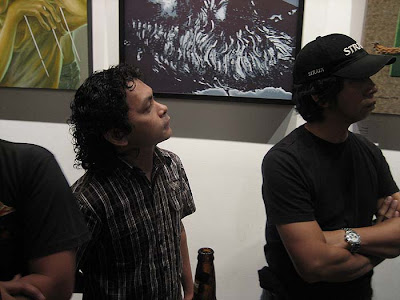 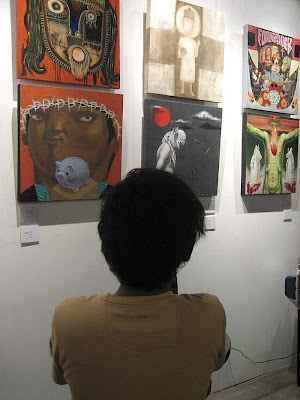 Here's another guy whose back I secretly took a picture of. I think his name is Villanueva and he's the young man who did the painting in the topmost middle. I am guessing, but I think he comes from either the University of the East or Far Eastern University's School of Fine Arts. I may be wrong but I have seen that manner of painting coming out from the kids from those two schools - using drawing and basic line shapes to build up their works. Pretty interesting and it has this editorial approach to it.

I also remember Roel Obemio complaining that he forgot to put the eyebrows on his work when he was done with it (the painting with the piggy bank). I stared at it and told him, that it is complete without the eyebrows. In fact, I thought it was better he didin't put the eyebrows on. It'd have looked more like a shadow. 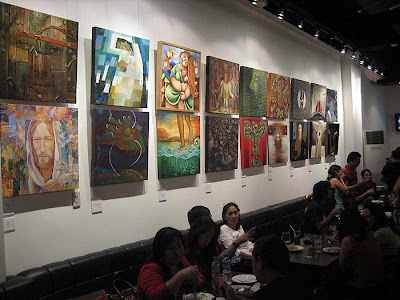 Oh look! I see something familiar hanging on the wall. Hehehe... 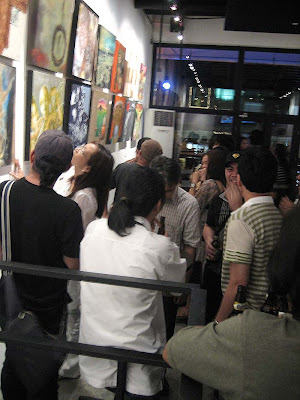 ... and another view of the bar/gallery leading to the terrace where some of the people would retreat to smoke their lungs out and enjoy the evening breeze. 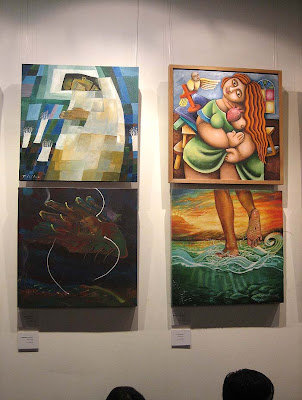 Of course, I can't resist taking another picture of "her" hanging on the wall. I found it funny though that the painting beneath her are of two skinny legs. 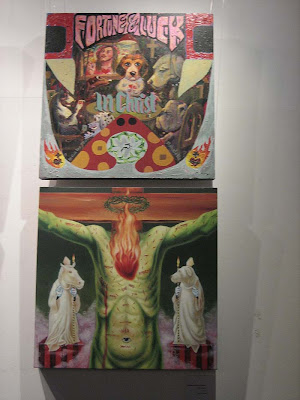 And the most interesting piece for me is the one done my Jucar Racquepo (the one on top). Satirical, biting social criticism and it reminds me of that poster with the image of card-playing dogs. I simply love it.
Posted by palma tayona at Sunday, April 05, 2009 2 comments:

KRISTO 2009
JUAN DE LA CRUZ (John of the Cross)
A LENTEN EXHIBIT
The Annual Kristo Lenten Art Show for 2009 is featuring works by various visual artist on April 02, 2009, Wednesday. The exhibition will open at 7 p.m. at BOTONG'S UP RESTOBAR located at the ground floor of A. Venue Mall, Makati Avenue, Makati City. (It is between J.P. Rizal St. and Buendia Ave. right across Great Eastern Hotel-Aberdeen Court.)

Posted by palma tayona at Wednesday, April 01, 2009 No comments: